Chester had his annual jab last Saturday. With Chester’s uncontrolled barking, his nervousness and wanting to escape the vet place… all coming out at one go, the situation was hellish. I didn’t know how to calm my dog down.

Calm like a goose when he first get on the car. Notice the white thingy at the door hand rest? That’s tissue paper and as I’ve forgotten to take it out, he chew all up. I even forgot to lock the car doors when we arrived at the vet. LOL


Then he got so loud that we have to restrain his mouth at the vet. But then that doesn’t stop him from barking. *chuckles*

Being calm down by my sister.

We finally let go of the muzzle and let him ‘breathe’ free a little. He was so nervous at this stage.

Since the doc got rid of his man helper, she got a lady to help her out. But that’s not good, because we had to carry Chester ourself (with the lady helper’s help) and we had to restrain him on the vet table from start to end. Aiyaha… anyway we waited quite long for the doc to come into the room and meanwhile Chester tried to escaped a few times. He was breathing heavily and so nervous. My sis asked me “You nervous is it?”. I said nope. Because often time a dog can sense its owner’s nervousness but this time it’s not me! Haha

Finally the doc arrived and straight away poke a needle in his arm to retrieve his blood. I was shocked. He didn’t need to find his vein first? At least the vet got that right. All this time I tried to calm Chester down with food names like ice, durian, ice-cream, vanilla ice-cream, cucumber ice-cream. At least he was wagging his tail a bit. Hahaha Then the annual jab thingy was done too and that’s the end. Of course we knew what Chester would do next, he’s going to fly down (based on last year’s experience), so we make sure he has a safe landing.

Called the doc for Chester’s result few days later and was told the globulin was high (out of range by 2 points). Other than that the rest of the results were good. Doc asked me whether there’s any lump on him. I told her there’s one at his butt (I had planned to tell the doc but forgotten since it was hectic) and was told to bring him in for her to check. So Chester got to ride the car for the second time. BUT the doc went back early that day. So we went again the next day… Chester’s third car ride. 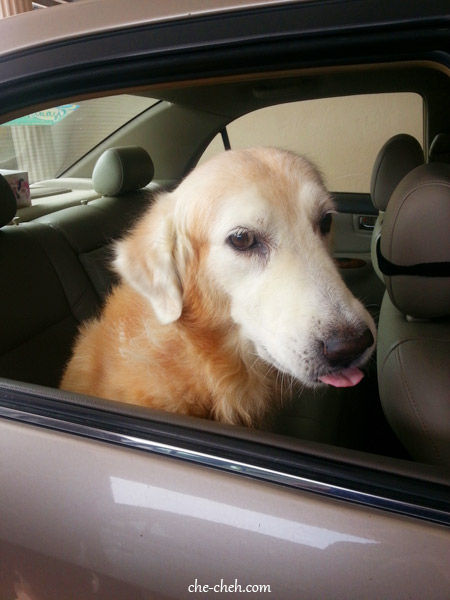 The vet felt the lump at his left butt and said it’s a growth and not a problem because it’s not sticking to his skin. Fhewwww!!! She told me to feed Chester more food because he looks thin. I actually reduces his food in order not to put weight on his back legs but I do agree 26.85kg is too thin. Less than a week later (on Chester’s 3rd car ride for the lump check thingy) he now weights at 27.4kg. Ahh I’m glad.

Every year I was nervous as hell when it’s time to hear his blood profile report but not this year. I guess that’s positive thinking? I’m glad Chester is healthy. Way to go boy!

When He Loves You