It all started a few weeks back. A new neighbor shifted to a house 2 doors away from us. The family consists of mom and dad, 3 beautiful children, a dog named Jimbo and a puppy named Jimmy. Ohhh what a nice family. 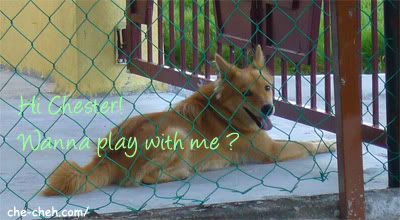 That’s what I thought at first. No no nothing wrong with the humans. It’s their dog… the one named Jimbo. Jimbo is a nice and innocent dog if he’s in the house compound. But when they let him loose (roam freely outside) he become a samseng kia!

Let’s see why I labeled him that:

1. He loves running and barking at cars.

2. He hangs out with another samseng dog group. One of the dog nearly bit Chester few months back.

3. One of the 3 children is scared of him. Once the daughter came back from school and Jimbo wasn’t tied up. She begged his dad to tie Jimbo up… eventually she managed to run passed Jimbo screaming all the way into her house.

4. He fights with dogs from the samseng group.

5. The dad always ride a motorcycle to bring Jimbo back to the house (with Jimbo trotting beside the bike). I wonder why. Not that he’s scare of motorcycle. But very funny. If they call him back to the house, he won’t budge. It’s like parents holding a whip and without whip. When I first saw this, I thought whylar the dad ride here and there near the house compound. Few minutes later, I heard him calling Jimbo at another neighborhood area. Jimbo was mingling with another dog. Not long after that, I saw Jimbo coolly trots beside his master’s bike and walk into the house.

I admit this: Jimbo is so cool.

AND all this arouse Chester. Now whenever we let Chester out to the house compound for him to do his business, the first thing he will do… guess what ? Run straight to the house gate and search for Jimbo.

I also realised one thing. Chester nowadays don’t really follow my order when he’s outside. Either I over manja him or because he’s really turning into a samseng kia!