A pleasant day out that turned into a nightmare. That’s all I can say about our day out @ Dogathon 2006.

We arrived at UPM, Serdang around 8.40am. Chester and other dogs caused a frenzy at the parking lot. Then he did something… he pooed on the grass! Shit! Shit! Shit! he must be damn excited because he had just had his toilet session about an hour ago.

Physical examination booth where your dog will be examined before they are being permitted into the event area. 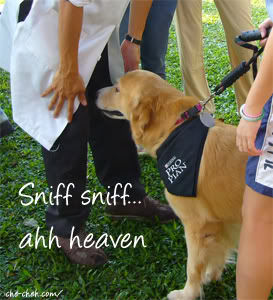 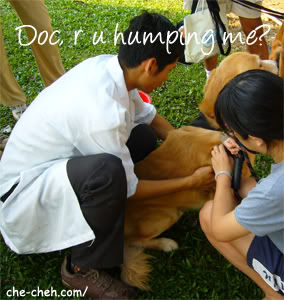 Sorry doc (whoever you are), this is just a joke.

After that we bumped into Dreamcatcher. Exciting right? I don’t see any dogs ‘kacau’ you.

Then we basically walk around and hang out from stall to stall. I initially planned to participate in a contest or 2 with Chester but had to cancel it as Chester was panting quite loud (already). No point stressing him out. I bought 2 outfits for Chester @ RM10 each. What a bargain! No not going to show his new outfits here. Later ya.

Do you know how much does a dog outfit normally cost? RM50-RM100
Sorry la… gua ‘kiam siap’/cheapskate.

It took me quite a while to lure Chester to play in this agility thingy (on a plank). Finally I succeeded. Whoa I’m so smart. I knocked on the wodden plank… just to make it exciting and WAH LA Chester felt for it. Chester then walked a couple of times on the plank… just like a pro. And he also tried on a see-saw but after that when he went up the plank again… he was so scared. He thought he is on a see-saw and the other half of plank will fall down abruptly. So he just lie down at the middle of the plank. Again took me quite a while to ‘persuade’ him to get up and walk on.

And unfortunately during this time, his panting was getting worse. Nope, water doesn’t work because this stubborn dog doesn’t want to drink in front of other dogs. He will only drink in the car. It’s like he doesn’t want to show his weakness. We rested for a while hoping he will get better but nope. A lot of people were already staring at us by then. Some of them go “Arghhhh” and a couple of them had worry faces and some of them look at Chester with queer look. I was a bit embarrassed. I guess he was the ‘LOUDEST’ dog in the whole Dogathon or umphh UPM.

Finally around 11.00am, we decided to go home as his panting was the worst that I had ever heard. I thought he was gonna pass out or suffer a heatstroke.

His panting doesn’t stop when we were in the car traveling home… not until he had a bath that afternoon.

Yeah he was so tired.

I’m so worry now. As I’m typing this post, I can still hear his loud panting (coz we bought durians!). It used to be not loud, just quiet huff when he get excited. I think something is stuck in his esophagus or maybe because he’s not fit?!? Arggghhh!!! I’m monitoring his situation and if he’s still not ok in a week time, maybe I need to consult a vet.

I just told him “Don’t leave me so early”.

Hottest Bitch In The Block