So last Saturday was the most dreaded day of the year for us all in the family. It was the pest & termite control day. The day our house would smell like toxin dump and it’s also the time we would be a bunch of homeless people for a good few hours. If you read our past experience you will know why.

As soon as the pest people arrive, we put Chester in the car with me dog-sitting him. You can see here he’s pretty excited about all the fanfare that’s going on outside the car window.


Only looking at his legs, I know this dog is quite KPC one (kepoh chee aka busybody). Hahaha

Here he’s just lying down for a bit before barking at ’em strangers again.

Ohh btw I figured if he’s wearing a tee, there would be less fur flying around. Hence he’s strutting the only dog tee he owns called The Bee shirt.

Once the pest exterminator were gone, we head out too with Chester. With one large dog and 2 people in rear passenger seat… nope we don’t have enough room. So my sis and me took turn to sit side way near the edge of the seat. Ahh things we do for our dog.

First thing Chester did when the car start moving: he gets cheeky with my sister.

Then it’s my turn. LOL. And my dog did this over and over again… to sis and me. Manja-nya.

We did a lil’ shopping, bought kibbles for Chester and lunch. We did all that with at least 1 people in the car accompanying Chester. It’s doable. 🙂 Ahh there’s this one time while waiting for the traffic light to turn green, I saw a guy pouting his lips giving a kiss signal to my dog and then he saw me looking at him… we burst out laughing! LOL

When we reached home, Chester’s been in the car for 7 hours plus. Don’t worry, we let him out of the car for leg stretching and potty in between… ohh and also enough drinking water. 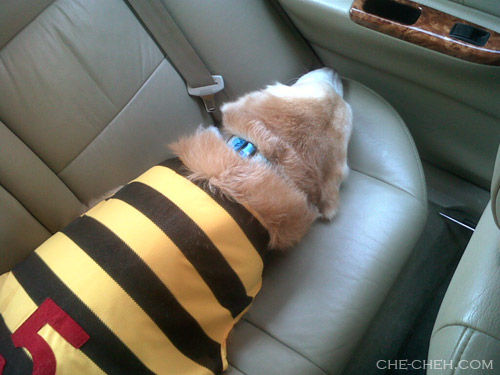 Once at home, Chester is not allowed to go in yet as the whole house need to be cleaned first. There were poison liquid everywhere, on the floor and the wall. So Chester stayed in the car. By this time, he’s dead tired. 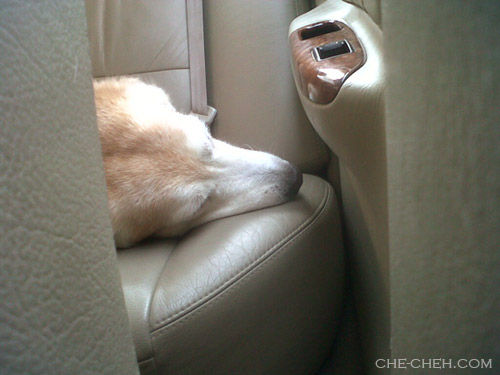 And when it’s time to go in the house after spending nearly 10 hours in the car, Chester refused to budge. He’s made his new home in the car! Hahahaha Thankfully this dog has very good nature. A lil’ bit of sweet talking, he’s back in the house.

I think he sprained his leg while getting down the car because after that he has problem getting up from lying down. Either that or he’s too tired. But then his back leg (I don’t know left or right) has always been like that… a bit weak if he gets too tired. He’s back to normal after a day rest.

There will be another car trip in a week or two time and I’m pretty sure Chester will be disappointed this time because he’s heading to the vet! Kekeke