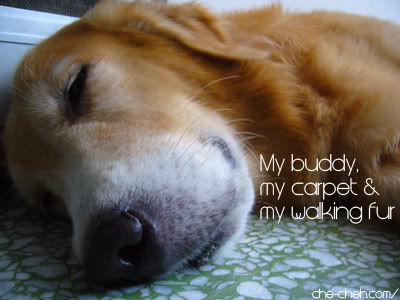 Remember I bought cake and cookies for Chester’s birthday not too long ago? Ever since then Chester has been down with flaky and itchy skin. I think he’s allergic to some sort of ingredient used in the making of the cake/cookies. Besides his poor skin condition, he’s been shedding a lot of fur too. There is non-stop sweeping in the house!

The good news is Chester’s skin condition has improved a lot this week. Fhewww! Less flaky skin and less fur shedding. His fur has grown back nicely. Other than that, he’s learnt a new trick! “Sneeze Chester!” “AH CHIUOOOOOOOOO” Hahaha very cute indeed.

Lately, I’ve been getting many ‘I’m so hungry’ stare from Chester and every time this slave is unable to resist his poor doggy drop eyes look. Need to share my food with him (only foods that he can eat yea). So you can imagine, he ‘sayang’ who more. 😉 He’s also a pro at eating apples from toothpick. He’s abit scare at times of the sharp pick but once he get one apple from the toothpick, he will continue the run. 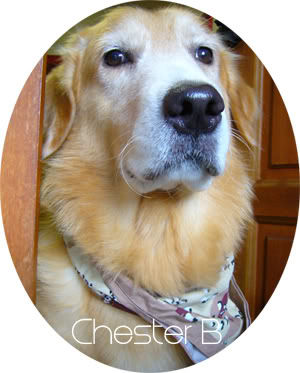 THE SERIOUS LOOK: is put on when preparing to bark or stranger ‘looming’ nearby.

p/s: Today this slave is on medical leave. Poor me.