My Beloved Furry Soldier Has Fallen :(

😭😭😭 The title says it all. My beloved furry soldier aka Captain FOREVER NAUGHTY aka Chester has wounded his hind legs in a battle. He got this infection since Sunday. Was caught licking his hind legs with great concentration. Unfortunately not one of us know what causes it. The only thing the war doctor inform us is that he might have step on something blunt (or his legs might have come into contact with an unknown X substance; errr should I call Agent Moulder and Scully?).

Can you see the reddish swollen skin? Even some of his black skin (paw’s base) has peeled off. Kesian. Doctor’s diagnosis: Pododermatitis (an inflammatory disease that involves the feet of dogs). Doc gave him some antibiotics and swelling pills. 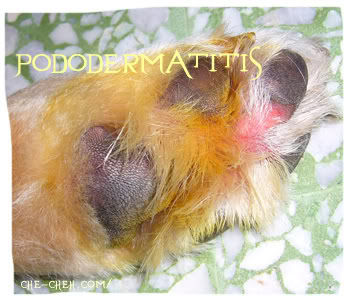 We redress his wound upon reaching home. We immerse some gauze with iodine and place it right in the ‘hole’ at his paw’s base. 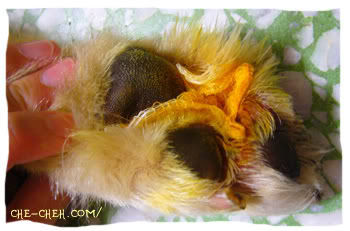 Then we bind it all together with cotton film and plaster. 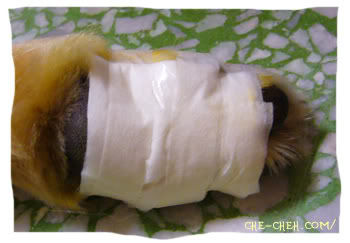 Oh lala! Because of his wounded hind legs, I let him wear a plastic to cover his bandage (tie with rubber band) before bringing him out for his night potty. Unfortunately he doesn’t want to pee le. Later I let him wear a pair of my socks (tie with rubber band again) and still he doesn’t want to pee. Sigh. Maybe he’s scare that he will miss his aim and ‘kena’ his new fashion. 😃

Other than this little ‘unlucky’ thing happening to him, he’s as good as he gets. His appetite is normal and he’s as charming and naughty as he ever wanted to be.

p/s: I woke up this morning and guess what? He has bitten off both bandages, eaten 2 cotton films and 1 of the iodine gauze has disappeared!!!