I’ve noticed a swollen area at Chester’s upper tail for quite some months. The infected area was initially a hot spot which became worst after Chester’s licking and biting. I gave it a few months to heal and healed it did but the swollen part wouldn’t go down. So finally last Saturday I brought him to the vet to see what’s wrong with it.

I was horrified when the doc shaved his tail revealing a battered tail with red and black spots. Doc asked me whether he’s neutered which of course is a no. Immediately the doc pointed out that Chester is suffering from stud tail.


Gross right? Do you notice the swollen area?

So what’s a stud tail? This problem is common for un-neutered male (stud) like Chester as his sebaceous gland near the tail is overactive, producing too much oil. It will cause hair loss, redness and black spots due to the oil. To treat it Chester was given a jab, antibiotics and anti-septic to clean his tail daily. Tsk being a stud also susah! Haha 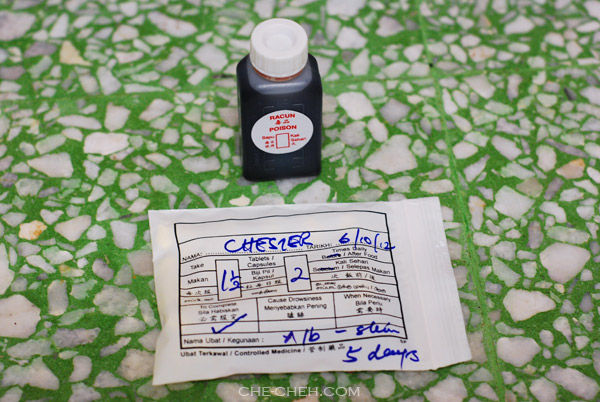 Chester’s medic. The antibiotics pills are quite large and smell yucky and yet my dog has no problem with it when I shove the pills down his throat. Hah!

My sis thought stud tail is a name given for Chester’s current fashion statement but nope it isn’t. And I was so glad that Chester behaved nicely while his tail is being shaved with an electronic shaver. How I wish he’ll be like that (an angel) when I cut his paws fur.

And that’s how my dog became the accidental lion!

His lion-tail looks so cute especially when he wags it. LOL Get better soon Chester.

Funny thing is sis and me thought his tail looks like a lion’s tail while parents thought it looks like a pig’s tail. Hahaha What say you?

How To Deal With Ear Mites In Dogs