I would be car-less for maybe 2 to 3 weeks. Damn that bastard! Tell you the story now.

It was Friday morning about 7am (last week). I was abit late than my usual time to work therefore I skipped buying breakfast that day. Isshh should have stop to buy breakfast and all this would not have happen. But bah it had happened and I’ve got to accept it.

I came to one of the Shah Alam roundabout and stopped to wait for cars to pass before I can go into the roundabout and just like that I heard a loud BANG!!! The impact was so heavy that my car bounced infront a few metres and our poor butts went flying for few secs. Sis was with me because I fetch her to work everyday.

A van had knocked my poor Altis’ butt!!! Damn! damn! damn! An Indian guy who is the driver came out of the van and then a few Indian + Bangladeshi guys follow suit. Looks like he was bringing these fellows to work. They’re from a security company and my guess is he was running late.

Alas we agreed to report this case to the police. He said he will claim his insurance. At least he ‘admits’ that was his mistake although not directly. But he asked me to report first. He will report later because he has work to do. What if he runs away eh? Nasib lo. I asked him whether he knows the nearest police station and from the way he told me I guess he really is telling the truth.

Then I saw someone stopped his car and came down to talk to the driver. This other Indian man told me that this driver knocked his car about a month ago at exactly the same location and that fellow did report to police and he did received the 3rd party insurance claim. Arggh I’m not sure this is just an act or real. 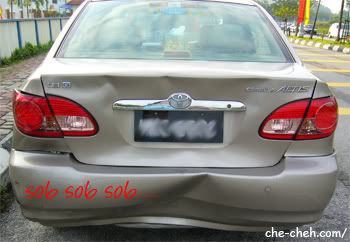 Poor car but I must say ‘tahan lasak’ la.
I’m not sure what to expect if I were driving a Proton.

Guess the bumper, boot and rear lights (although not broken) need to be repaired.
I think the exhaust pipe and something else underneath my car (a steel) also need repair.

All when well at the police station. After the ‘mengadu’ procedure, a police took pictures of my car. I even got ‘questioned’ by a Sergeant! After that I drove my ‘seriously injured’ car home with dad tagging along in his car. My car would be ‘staying’ in the house porch for few days before all the rightful documents can be prepared for 3rd party claim and repairing. It’s not worth driving my car anywhere in case anymore bad things happen.

I received a very good news later after dad had dropped me at the office. The driver called and informed me that he has just made a police report. I double confirmed with the police station and indeed it was true.

Right now I can only pray that all the documents can be prepared ASAP to speed up the claiming process. I think all these also depends on the contents of the driver’s police report. If he change his story… arrrghhhhh!

FYI, this is the 4th accident involving my Altis (in less than 2 years; 21 months precisely) and this is the first major one. Read the 3rd one here.

Sis told me later on that his boss told him that 15th December was a ‘good day’ in Chinese calendar. Ok let’s see if it’s true or not coz I bought my car number, my car ‘reverse’ number, police report number, date of the accident… hmm what else ahh the driver’s car number ‘nombor ekor’.

I’m Back & There I Go Again…To Bangkok (maybe)


The Making Of Kuih Kapit