태양은 가득히 Full Sun aka Beyond the Clouds (Korean Drama)

Full Sun is known as 태양은 가득히 (taeyangeun gadeukgi) or Beyond the Clouds. Beyond the clouds there is a silver lining. 🙂

I didn’t bother at all with Full Sun when it started as I didn’t know the two leads (Yoon Kye Sang and Han Ji Hye). I haven’t seen them acted before. Then WHAM BAM… just first episode and I already love them to death. The drama ended with me being heavily invested in it.

What this drama is about?
Read the synopsis from KBS World:
In the night of a glamorous jewel exhibition opening in Bangkok, a gun shot rings out.

A young man and a young woman, who are reaching toward climax of life, are facing critically each other across the gun shot.

Han Young Won loses her fiance during the shot and Jung Se Ro is the one who is blamed for murdering Young Won’s fiance.

Five years later, Se Ro, who has got a new life with a new name, and Young Won, a cold-hearted meet again. Those two seems to have crossed the Rubicon, but Se Ro floats his boat with an intense feeling of ‘revenge’. Believing that at the end of the Rubicon, there will be the ‘Doom’ of those two who have destroyed his life, Han Young Won and her jewelry brand, Belle la Fair.

However, at the end of the Rubicon that Se Ro tries to cross, there is no fury, hatred, or revenge, but only love. Will they get over ‘a tragedy of the night’ and forgive each other?

Does it sound exciting? Not really right? Gotta agree the plot lines are typical but that’s the only different with other revenge dramas. How this drama carried itself stunningly was all thanks to the writing and brilliant acting by the casts.

Jung Se Ro:
“You take my life so easily. You hurt my soul so badly. I still cannot forgive you. But, I cannot stop myself from loving you.”

This is where it all start. Flower delivery. 🙂

Can you feel my heart beating like wild fire?

Yoon Kye Sang acting as Jung Se Ro and Lee Eun Soo were so intense that I got absorbed into his world. His eyes speaks volume and his gaze is addicting. But when he laughs (which isn’t many) he looses all the coolness and a dorky closed-eyes man emerge. LOL You found a new fan, Mr Yoon!

At first I thought Han Ji Hye will be the weakest link in this drama. Turned out she did extremely well with her emotions and facial expressions. Bravo. I’m a new fan of yours.

This picture of Yoon Kye Sang remind me of my dog. I mean no harm. Just compare it with my Chester below. 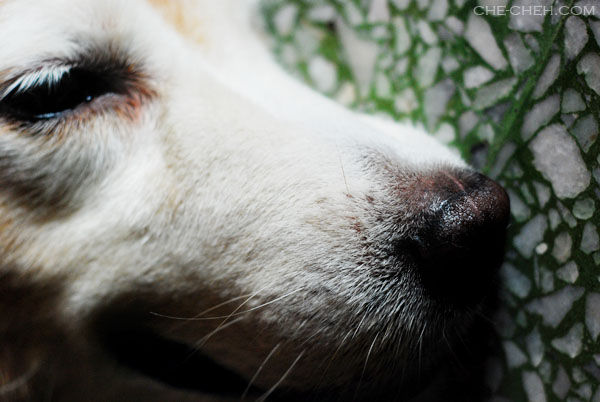 Ahh I don’t know… I just love this picture.

I love the song 고래 Whale by Zitten and 태양은 가득히 Full Sun by Yangpa. Been playing both songs like hundreds of time.


The Making Of Kuih Kapit