I’m listing down the 6 handphones that I have used so far and the tragedy that struck them that bring them to their demised. Ouchh!

My first handphone was NOKIA 3210. This model was announced in 1999. I bought mine in 2000 with a RM1k price tag. It comes with a nice design but it was damn heavy. This handphone went down the toilet hole during one of my shopping trip visit to the loo. I used a plastic bag to fish out the handphone. Ewwwww… can’t power up the handphone after that even after I dried it. With all those acid/alkali stuff in that hole, I doubt it can be operative again. My fault for wearing a large pocket trousers. From then on, my dad keep reminding (babbling) me to always put my handphone in a save place before I do my business.

Immediately after that I bought Nokia 8250. It cost me around RM800-RM900 in 2001. I love this handphone very much because of its blue backlight, ‘X’ navigation buttons and sleek design and it was so much lighter. This handphone was stolen during my company’s annual dinner at Sunway Pyramid Convention Centre in 2002. Ok also my fault because I placed the handphone in my bag behind my seat (bag that dosen’t have zip). I guess it was during eating or talking with friends that someone (I suspected a waiter) stole my handphone.

Why I suspect a waiter? When I recollected back what happened, I realised there was a particular waiter that keep pouring drinks to my cup. Bugger! I alerted the management there and they did a spot check but couldn’t find that fellow (I remember his face but too late he was a part-time worker for that night only). I also did a police report and ended up losing RM2 just for making that report. Aiyar.

The adventure continued after that because I tried to call my stolen handphone number and that stupid idiot picked-up my call. I can’t do anything so I tried calling him several times with the help of my good ole friend, Amir pretending to sell something through the phone. :laughing: Then I found out that we can actually block our hotlink line so immediately I visited Maxis. Until today I’m still using the same phone number. Oh yes my dad again cut me into half. He scolded me many times and keep reminding me of that tragedy. I never step into Sunway Pyramid Convention Center again. Very painfully… I moved on.

My third handphone was NOKIA 8250 again. Suprise Suprise!!! It cost me RM700++, cheaper abit lo. I love this model so much that I bought the same one again. 😉 Nothing happened to this handphone YET but I decided to change to a camera handphone in 2004… 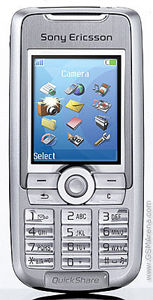 So ta daaa… my fourth handphone is a Sony Ericsson K700 priced at around RM1.7k. I don’t like this handphone because I always felt like vomiting when I look at the color screen (I have no idea why) plus this model’s buttons is a shame! Arggh press press press… bang bang bang! Meanwhile I passed my NOKIA 8250 to my mom. Good girl!

My K700 was destroyed until ‘cha toh mou tak cheng’ (cantonese; don’t know how to explain in plain english sorry) while we were having dinner outside. So who was at home? Chester lor. In a way I have to thanks him. He helped me destroyed my horrible handphone. I was not mad with Chester at all. In fact I was very concerned with him. You see, he bit off the camera lens!!! Let’s see what else…I think you better take a look at these pictures over here, here, here, here and here. Very dahsyat right ? Thank God he was OK.

Actually it was also my fault. Just before we went out for dinner, I was teasing Chester with my handphone’s cute little teddy bear wrist strap and I left my phone on the sofa. Serve me right la. Until today my dad will blast at us if he sees any handphone on the sofa.

Then my mom gave me back my NOKIA 8250 but I didn’t use it for long though. One day while I was going down an escalator in KL Plaza holding files in 1 hand and suddenly mom called me. I use my other free hand to answered the phone which leaves me with no extra hand to have any contact with the escalator’s handle. Suddenly I lost my balance and I threw my handphone away just to free 1 of my hand and caught the escalator’s handle at the right moment. Clink clang clung clink… down went my precious handphone. That’s how my darling died on me.

My ‘new’ 6th handphone was NOKIA 3210, courtesy from my sis. It was her first handphone too and since she’s currently using K700 (we bought at the same time), she’s giving/loaning (I have no idea which one) me her 3210. I’ve been using it since 2005 and it seems that the battery has shorter life as the day goes by. Even at full charge, I can answer a single call in less than 30 seconds before the handphone went out of battery. Besides the battery for this model is no longer sold in the market. Then the back cover of the phone cannot close anymore since I dropped the handphone a couple of times recently… eh not purposely la.

This bring us to the next question… What’s next?

You will have to check my blog tomorrow for the answer. 😛