It’s been hmmm… about 4-5 months since I update my plants condition here.

Sad to say I wasn’t able to save the rosemary plant. I tried propagating it by cutting and it survived for awhile but one fine day I accidentally pulled it out (there were tiny roots even!) and then hor I lost it!!! I was pulling weeds ma since CNY was coming but somehow I lost that tiny rosemary plant. Searched high and low but it just disappeared. Sigh. Yeah that’s the most saddest thing.

As for the basil, I propagated it by cutting too and now it has grown much taller and healthier. So happy! My secret is not to bother with it, pinch some bottom leaves off (if yellowing) and water every 2-3 days or if the soil is dried. 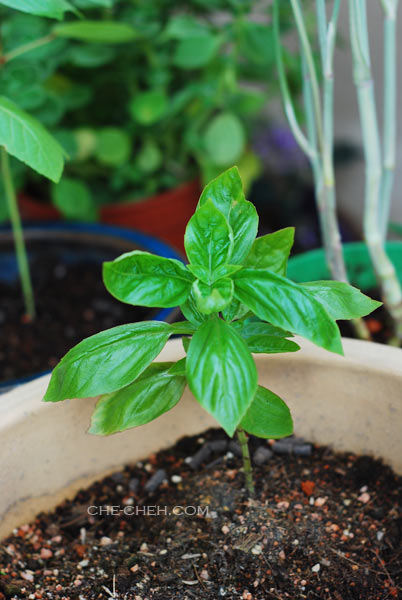 I placed both the rosemary (that died) and basil in shaded area with direct morning sun.

I also planted some Roselle seeds which I got it by drying the pods. Every one of the seeds grew but then the plant only grow taller but never wider. At most they consist of 6-8 leaves max. See for yourself below:

Left: baby Roselle plants, Right: ‘kiddo’ Roselle plant
I noticed the leaves will turn red once I put them in direct sunlight.

Last weekend, I went to Sungai Buloh again for herbs hunting. I’ll tell more in the next post. Meanwhile while searching for herbs there, I chanced upon (what else) but Roselle plants. They’re so big and healthy. My eyes were bulging out and reached the floor (like cartoon) Selling price is RM8.00. Of course I bought one home.

Are your eyes bulging out like mine now? Hehehe

Let’s make a comparison between my homegrown roselle plants and nursery bought roselle:

What a contrast!!! LOL

I was told that my skinny Roselle plant is most probably due to lack of nutrients. So yup… I’ll feed you more fertilizer baby Rosellesssss.

Can you see it’s flowering already?

Will update in a month or two once I reap the reward. *fingers crossed

p/s: I’m sure there are many nurseries in Sungai Buloh that sells Roselle but this is the only one which I saw (by chance) during my visit there. If you’re facing Yeap Nursery, this one is just on the left of Yeap Nursery. Not sure of the plant nursery name. Tsk I actually mistaken that nursery for Yeap Nursery when I first arrived there. I even asked them whether they sell herbs. They said sold out but they get their stock from Cameron Highlands. Just so you know.