We woke up early on day 3 as we are going to Pak Khlong Talad aka Flower Market. We left the hostel quite late actually… about 6.30am and traveled by Metro (subway) from Sukhumvit to Hua Lamphong. One thing good about our hostel is that it is in close proximity to Skytrain (Asok) and Metro (Sukhumvit) interchange.


From here, we took 2 taxis to the Flower Market and it is at this station that we encountered 2 angels in the form of a railway guard and a taxi driver. It was the railway guard who told us to request the staff from Tourist Information counter to write down ‘Pak Khlong Talad’ in Thai language and he was the one who effortlessly take care of the taxi queue. I’ve never seen any railway guard or whatever guard who is so dedicated. Bravo.

3 of us hopped on the first taxi available while 4 other friends hopped on the next one. Unfortunately for us the taxi went into a standstill after 3 corners. Wooppps! The taxi driver told us that he was sorry and that he was unable to bring us there as his car couldn’t start. I asked him how much we should pay for the ride and he said “Nevermind”. We expressed our appreciation and quickly walk back to the station. Meter taxi flag down rate is 35Baht for first 2km.

The guard that I told you about earlier doesn’t seem to be amazed that we went back for another taxi. When we hopped on another taxi, he told us to make a note of the taxi driver’s no. plate (in case). Maybe he thought that the first taxi driver cheated on us.

These are young lotus. Beautiful yah. 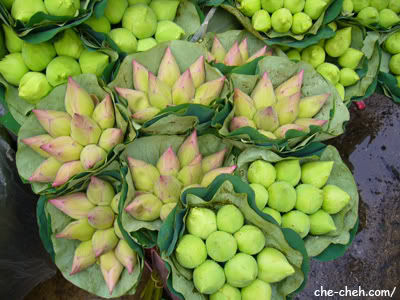 Can Moz please help identify these pictures to see whether we visit the correct market?

As we go deeper inside the market, we saw vegetables as well. *scratch head even more* After a very short excursion to the market and back, we went looking for a place to have our breakfast. We stopped over at a shop that sells chicken rice and noodle soup. I guess this is the best way to appreciate authentic Thai food. We relished the taste of Thai chicken rice @ 25Baht per plate. Goodness me! The chicken rice and soup were awesome!

After our morning feast, we went looking for Grand Palace. We had no idea what street we’re on and have to ask around for direction. I knew we’re lost the moment the taxi brought us to Pak Khlong Talad. This event also sparked some constraint within our group. My group members were waiting for me and my sis to point to the right direction. I think they thought we’re tour guides! It was always us holding the maps & itinerary. Aiseh!

Apparently we found out that Wat Pho< is nearer. It was quite a long walk and we managed to view some local Thais sundry shops, small warehouses and school. Wat Pho admission charge is 100Baht (~RM10). In the picture below the towering pagodas are called chedis, memorials to the past monarchs. There's also the fame Wat Pho Thai Traditional Massage School but unfortunately due to time constraint we gave it a miss. Wat Pho houses the fame Reclining Buddha. The statue is 46 metres long and 15 metres high and are covered with gold leaves. Truly beautiful. The first thing I said when I went in the building was "WOW!!! The wall of the building is full of beautiful painted mural depicting story of the ancient world. The feet of the Buddha’s statue are laid with mother-of-pearl designs and we are forbid from touching it.

After that we had a LONG LONG walk to the Grand Palace. We were fooled by a tuk-tuk driver that told us to go ‘that’ way where we covered 1/2 of the Grand Palace outer wall #^@&!*% when in fact the other way is so much shorter. Along the way we were harassed by a few tuk-tuk drivers telling us that Grand Palace is close for the morning. Of course we knew it is a scam.

We rested quite awhile when we arrived at the Grand Palace main entrance because all of us were so exhausted. While resting we had a good laugh at some of the ‘Orang Barat’ tourists. In order to enter Grand Palace, visitor must dress appropriately and some of these women and men dressed in short, skirt above knee, sleeveless etc. Proper clothing will be loan to them at the entrance and there was this 1 hot guy we’re laughing about. He was wearing a VERY bright yellow trousers (loose fitting type). The moment you see that trousers I bet you’ll be turned off as well. Poor him.

The Grand Palace ticket costs 200Baht and admits you to Vimanmek Mansion Museum and The Royal Thai Decoration and Coin Pavilion as well (we didn’t visit these 2 buildings unfortunately). First, we visited the Upper Terrace which consists of a large golden chedi, Phra Mondop and a carved model of Angkor Wat and another building which I have forgotten the name. Phra Mondop is covered mostly in gold, white and mirror tiles. A sight to behold! 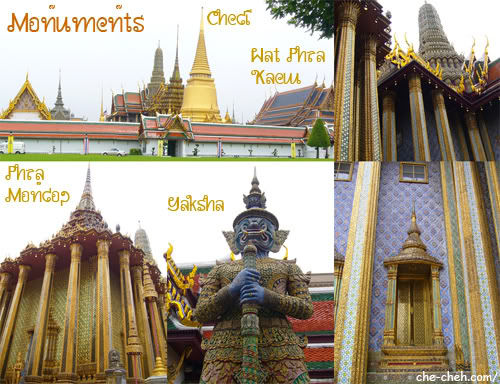 Next to Upper Terrace is the most famous temple in Thailand, Wat Phra Keow or more famously known as The Temple of the Emerald Buddha. These pictures didn’t do justice due to over-exposure hehehe I blame the weather and myself (too) for not recalling how to set my digi cam.

Ahh what can I say about the Grand Palace? It’s beautiful and it gave you a grandeur feeling. I especially loves the golden color roof top.

Ahh oh ya at the souvenir shop in the Grand Palace, there’s a small postage office… which brought sheer delight to sis and me. We’ve been looking for a post-office high and low. We sent 2 postcards back to our home just because we wanted the stamps. Hehehe. Got the postcard few days after we came back. It’s always nice to read back what you wrote in the postcards… memory.

Next stop is Chinatown and this time 3 of us gotten a ‘BAD’ taxi driver. I don’t understand. If he doesn’t want to take us there why in the first place agree to it? He almost had 3 accidents, he is a maniac and I suspected he took us ‘jalan-jalan’. First he came to a stop ‘somewhere’ in Chinatown. We said “NO” cause we already told him our destination is a hotel near Sampeng Market. He grunted loudly. And when he came to a stop at the wrong hotel, we said “NO” again and this time his grunt is so scary that we said “OK OK”. We walked several blocks to our 4 friends who while waiting for us had finished their lunch at a hawker stall. Along the way we asked quite a number of people for direction. Bliss eh?

I can say that my lunch at Chinatown is the sweetest of all. I had glass noodle soup + green tea @ 45 Baht. Slurpppppppppppp the soup was so ‘CHENG!’ (wonderfully delicious) that I drank it all… why not? hehehe and I got to convey Hokkien with the lady hawker. She is so sweet. Then we walk walk walk until we arrive at Sampeng Market.

At Sampeng Market you can find cheap clothing, footwear, jewelry, textiles, fashion accessories and many more. Sis and me bought a few packets of long beads, glass beads and crystals. Hahaha.

Right after Sampeng Market, we were supposed to visit Wat Arun but due to time limit (closing in 1.5hrs time) we decided to leave it until tomorrow. So we went back to hostel for a 2 hours rest. And then when we were about to leave for dinner, it pours. Our first Bangkok rain. Wohooooo…

Later on, one of the girls suggested to walk about our hostel area to hunt for hawker food for dinner. Because it had just rain, not many hawkers can be found along the road. But we found these… fried grasshoppers, worms, frogs, etc hehe. One of the guys bought a packet of ‘insects’ to be tried out after dinner.

We went to Robinson looking for a place to have dinner and thank god there’s a food court there. However one of the girls decided to skip dinner and go bra hunting instead. I had a shrimp tom yam for dinner plus 1/4 of a worm. Why 1/4? because I dare not touch the fried worm. It looked so alive. So my sis break ’em into 1/4. LOL. After dinner, our friend went and bought 3 more packets of ‘insects’ for souvenir for his friends!

Don’t worry we didn’t visit any 7-11 along the way home because we already bought some food stuffs at Robinson’s TOPs supermarket. I ate an instant noodle before retiring to bed. The tom yam that I ate is like nothing. Aiyoo.

Since sis and me were a little pissed off by that day’s episode about us tour guiding our group and we’re SO TIRED, we told our friends that we have cancel the next day’s plan. They can go wherever they want and we will follow them. Heh I’m not that evil lah woiiiii. But then it’s good that I cancel the next day plan (fyi, I drew out the Bangkok itinerary with Moz’s help hehe) because according to a Thai lady Damnoen Saduak Floating Market only opens on the weekend (blame myself for not paying much attention to this matter). Plus afternoon plan for the next day is shopping only… cancel also nevermind as more than 50% of us have little cash left. Thought of going to Taling Chan Floating Market but the Thai lady said no more or only on weekends. Ahhh I forgot. Wanna know where we’re going the “next day”? Find out about our floating market alternative tour. Stay tuned!

This is a short video clip of the song Don’t Cha (PSD) sang by a Thai singer at Suan Lum Night Bazaar. Enjoy.

Chester Is A Member Of Running Man’s Traitor’s Club?