First and foremost, Happy Deepavali and Happy Holidays!
I think I owe you guys this post. Sorry for taking so long. Lazy mah. I promise you this will be the last LONG post I’m gonna write in quite sometime. Like previous Day 3 post, please look at the pictures if you’re lazy to read.

Last day in Bangkok. After our brekkie, we traveled by Skytrain from Asok to Saphan Taksin station. Hehe we’re going for a boat ride along the Chao Phraya River!!! Sathorn Pier is just a short walk (about 200m) from Saphan Taksin station. We decided to get on the Chao Phraya Tourist Boat. At 100Baht per person, the price includes a One Day River Pass for unlimited rides (for 1 day), Chao Phraya Travel Guidebook and drinking water. There is also a tour guide on board to enlighten us during the ride. The tour boat operating hours are from 9.30am to 3pm and provide service to 9 designated piers. 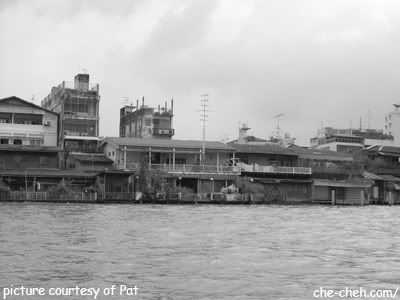 For me, it is stunning looking even on a normal day. The admission fee is 20Baht. Climbing the steps of Wat Arun reminds me of the Great Wall of China, wild steep steps! Wat Arun is covered with colorful Chinese porcelains. You’ll be surprise my friend that it is so strikingly beautiful that you can’t take your eyes off the porcelains. Wat Arun is by far my favourite temple and I would love to stay there forever! (if they allow la)

By the time we arrived back at Tha Tien Pier, it was drizzling. We were contemplating whether to board the Chao Phraya Express Boat to our next destination or have our lunch at the pier’s food stall. We didn’t have to make any decision as the drizzling became a heavy downpour. Our lunch was a good one. I had glass noodle soup that comes with crab meat, pork ball and fish ball @ 30Baht. After that we bought some yummylicious snack such as sweet potato balls, fried tofus and fried pohpias at the pier entrance. We didn’t have to wait long for the rain to stop either. It became sunny again.

We hopped on the next available tourist boat and disembarked at Phra Athrit Pier. We traveled by taxi to The Marble Temple (Wat Benchamabophit). No no not gonna visit another temple. We were there to visit tanks! There were 2 tanks and few trucks parked right infront of The Marble Temple. Ah we got to touch the tanks and took photos with several military guards. We even posed with yellow roses (just like they show in TV).

We didn’t linger long as we have another great mission to accomplish. It was here that we bade farewell to the 3 girls. 3 of them are going to Robinson for last minute shopping (bra shopping!) and then 2 of them will board the plane back to Malaysia (1 hr earlier than us) while our remaining friends (girls) will wait for us at the airport. 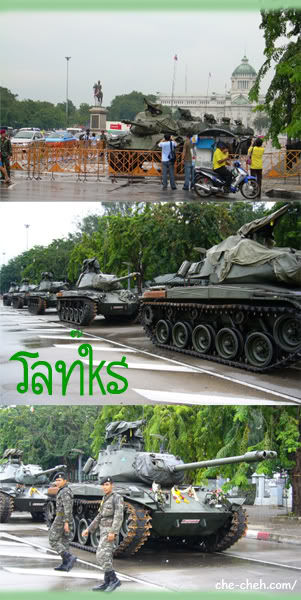 Then we hailed a cab to Victory Monument. I think we spent like 5 minutes there only. Posing and taking picture of the monument. We parted ways after that because me and sis would like to go to MBK for our last minute shopping while the guys would like to go to Chatuchak for their last minute shopping. We promised to meet at our hostel’s entrance at 4pm.

So off we went to MBK. As you remember we didn’t ventured much when we came to MBK the other day (coz of painful legs!). Luckily we check out the top floor of MBK this time. There were many cheap ‘pirated’ clothes for sale. We bought 2 Billabong beach shorts, a handbag and packets of dried food. Ya I know not much. What to do? We were out of time. We had an early dinner at the MBK food court and hurried to the Skytrain.

At nearly 5pm, we finally meet up with the guys at our hostel’s entrance. Ohh we’re so late. We quickly retrieve our luggage from the luggage storage room at the hostel. The guys told us that Chatuchak was closed! OPPPSSS! Hmm I thought some part of the market will be open even on normal days. No?

Guess how many extra luggage did we packed on our last day? JUST EXTRA ONE! We chucked all our stuff into a big black bag but it were damn heavy! Total we have 2 luggages. Cool eh.

And the drama of all dramas started soon enough. I didn’t need to hail a cab as a taxi voluntary stop right in front of us. We did thought about taking the airport bus but unfortunately we were running out of time and we need to cross the road to the other side (use overhead bridge). Since we all have freaking heavy luggages we opted for a taxi instead. We told the driver that we wanted to use meter and he agreed to it. Once we’re inside, he refused to do so and quoted us 300Baht for the ride plus 60Baht for 2 tolls (40Baht and 20Baht each). We can do anything except agreed to this negotiation.

About 45 minutes after we departed from the hostel, I started to get the tingling feeling of ‘water’ building up in my kidneys. I sat at the middle back of the taxi and the A/C was blowing at full speed. I requested the taxi driver to lower the speed and asked him how much longer before we reach the airport. He said maybe about 1/2 hour more. Few minutes later, I asked him to pull over coz I REALLY need to answer call of nature. He keep shaking his head as if he don’t understand the word toilet. We found a Thai phrase for toilet and told him. I think he was just pretending that he can’t understand. He said he can’t stop for fear that police will ‘saman’ him for stopping at the side of the road. Really man, the road have no emergency lane! I asked him to exit the road and try to go to another road where he can stop. Again he said he can’t. Actually he was right. There were no way out. Coz all the roads were jammed up. Oh SHIT @#^%$*! I’m DOOMED…

The driver sighed many a times due to traffic congestion and my crazy request! Pity him also lo.

Then I started to panic. My heart beats BUP BUP BUP. I wasn’t sure I can hold any much longer. I felt my kidneys were failing me. OHGOD. That was the most horrific feeling. I started to ran through some options. Pee at the bushes beside the road? Pee in the car? (since I was wearing a jeans; better absorption wuahaha) Run to the nearest petrol station? (that is if the driver wanna stop) Run out of the car while the taxi is moving? (and then find a place to pee and try cathing the taxi or bus).

Again I asked him to try please please please stop for me. My friends also helped me to talk him out. I saw a few high-rise building along the way. Ahh maybe there is a chance? And then we saw the road bends abit and there is some space for the taxi to stop. He did stop for me. Fhewwww! Our friend Pat and me quickly climbed out of the cab and ran to the nearest building. Along the way we climbed 2 or 3 road boulders. Arggh why did they made the boulders to be that high. It was as high as my waist! We ran under the drizzle, my jeans was wet due to the climbing, some vehicles moved out of our way as they see us running and finally we reached the building. The drama didn’t end there.

We asked the security the location of the toilet and I think I heard him saying first floor. So off we went to the lift. Gasped. Why can’t I press the first floor button but I can press the other floors’ one? Aiseh the reason was because we’re at the first floor mah. We reconfirmed with him and this time he said 10th floor. WHAT!!! (all the floors’ toilet were closed except the 10th floor)

I can finally breath easily after emerging from the ‘holy’ room. Quickly we ran back to the cab. The situation is similiar: climbing boulders, running like hell and crossing roads. I exchanged seat with my sis because I scare I will need to go again. The remaining journey were boring. Besides the occasional sighing from the taxi driver, we were like crunched up in a small jail cubicle. I feared for my sis as well because that #$^& driver turned the A/C to top notch again. At 3/4 of the journey left, the roads were back to smooth sailing.

Finally we reached the airport at around 7.30pm. 2 1/2 hours journey of hell ride for me! When we pay the taxi driver 300Baht, he was giving out a loud sigh. (we had paid him 60Baht earlier in the cab). We told him the unused toll money is for him. What to do wor. If he were to use metre, I think we will have to pay him almost double (maybe). It was his calling earlier on and we just abide to it. But I regret abit later on. I should have pay him extras just for the favour he has done for me. Very quickly, he had a custormer asking for the price of the cab and he humbly told him 300Baht. *sniff sniff*

Later on, sis told me that while Pat and me were off to the loo the driver came out of his car and were pretending like his car break-down.

The cab stopped at Terminal 2 and we after some inquiring we found that AirAsia check-in counter is in Terminal 1. So what did we do? We ran like hell while pushing 2 trolleys.

We did some shopping for mom at the Duty Free Shop before retiring to the airport waiting area. Tell you what. L’oreal products are very cheap here (@ one of the duty free shop). About RM10 cheaper.

Not long after we sat down, it was time to board the plane. Bye Bye Bangkok. It had been one hell of a journey. I would surely come back for more shopping, food, river cruise, temples galore and floating market minus drama. Although I had met one or two ugly side of Thais but overall I felt welcome. And I will welcome myself to Bangkok again.